Cinnamon Roll Cake -  The best ever cinnamon roll cake that is perfect for breakfast with a cup of coffee, but also a great crowd pleasing dessert!  This cake is super soft and moist, has a gooey cinnamon brown sugar swirl, and is easy as can be to whip up in no time! 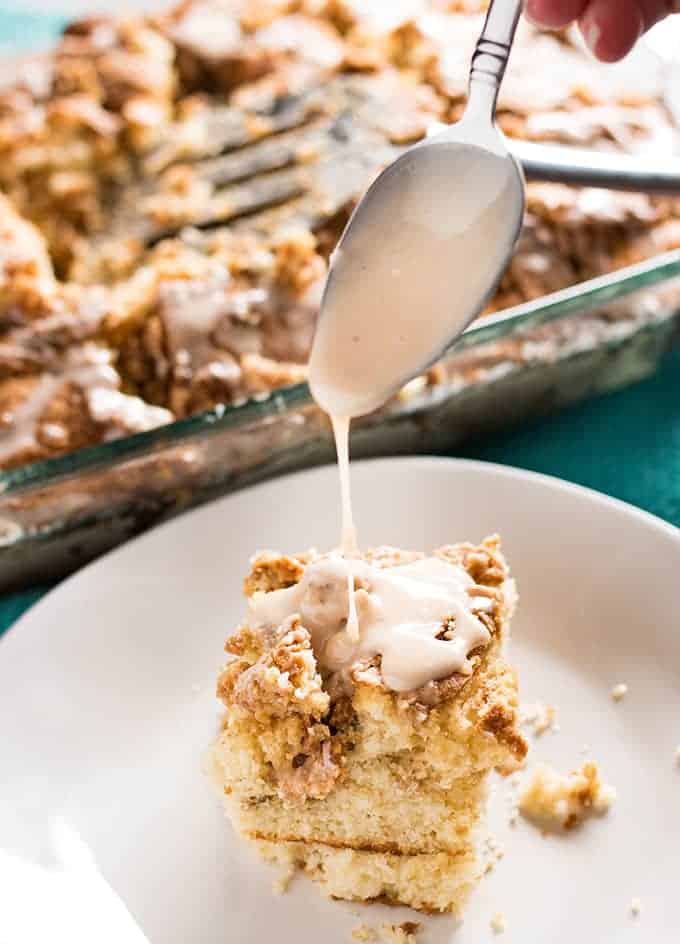 ***This recipe was originally published on 8/3/2016 and has been updated with new pictures and a video!***

I'm the type of girl that will do pretty much anything to stick cake into my breakfast plans.  Cinnamon rolls are breakfast, so this means cinnamon roll cake is breakfast too....right? Right.

Logic of a cake crazed maniac over here.

Lately, I've been trying to be a good girl and eat really clean during the week....which is seriously nearly impossible when you have delicious baked treats just begging you to eat them all the time.  But last week I did really good you guys *patting myself on the back*

This means that by weekend time I was dreaming of cake in my sleep.  Yes, this cinnamon roll cake came to me in a dream. Like a vision with bright lights and cake floating above the clouds and all of that.

So, I found myself up way too early on a Sunday morning to make and devour my vision. 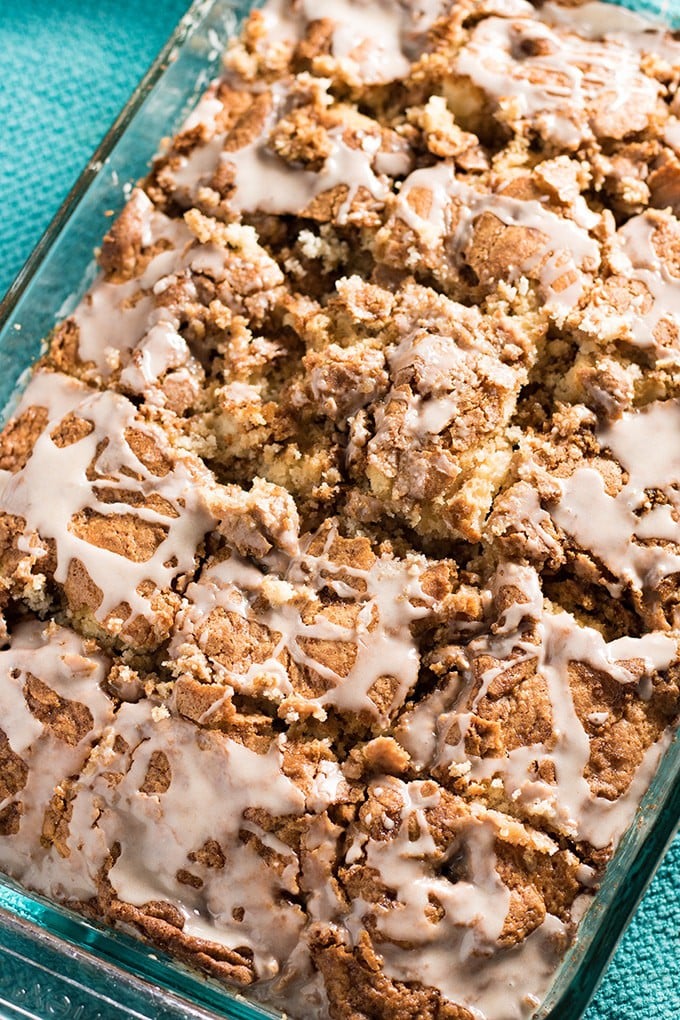 Since this cake was high on my priority list Sunday morning, obviously personal appearance was not.  It was sweatpants, 80's style side ponytail, raccoon eyes because I'm a failure at washing my face before bed, and a giant men's black t-shirt that was covered in flour by the time this cake made it's way to the oven.

Sorry about your shirt Dan....here's some cake though.

Anyway, cake came out perfect, cooled, glazed, stacked and it was time for pictures.  By this point and time I was hangry for some of this cake.  The picture taking seemed to last for a million years. FINALLY pics were done and I grabbed a slice of this deliciousness and shoved it in my mouth as fast as humanly possible....and then the doorbell rang.....

and you remember what I said about my appearance....so there was that and me with cheeks full of cake and another piece of cake in my hand.

So, I answer the door in this complete state of disarray and who do I see?  Dan's morning show co-host.  His new morning show co-host that I haven't had the pleasure of meeting until now when I look like an unshowered cake fiend (which I totally am).

Thank the Lord this Dave has a good sense of humor.  Or maybe he was just polite because I offered him cake? People are less judgmental if you give them cake. Fact.

Now that you've had the pleasure of hearing about my Sunday shenanigans....wait, are you still reading this?

Be sure to check out the video for this recipe below!

If you're looking for other amazing cinnamon treats, try my super popular Cinnamon Sugar Donut Muffins! 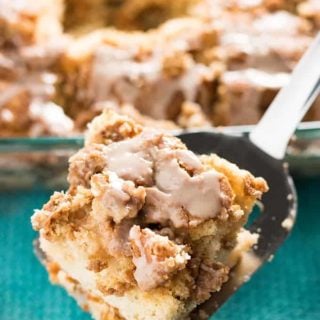 The best ever cinnamon roll cake that is perfect for breakfast with a cup of coffee, but also a great crowd pleasing dessert!  This cake is super soft and moist, has a gooey cinnamon brown sugar swirl, and is easy as can be to whip up in no time!
5 from 10 votes
Print Pin Rate
Course: Dessert
Cuisine: American
Prep Time: 15 minutes
Cook Time: 35 minutes
Total Time: 50 minutes
Servings: 12
Calories: 250kcal
Author: Nichole