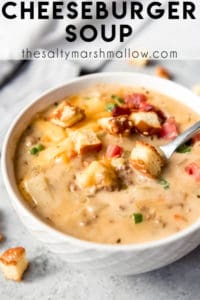 Cheeseburger Soup is a creamy, comforting bowl of delicious burger flavors topped with plenty of garnishes you would see on a classic cheeseburger like cheese, tomatoes, pickles, bacon, and even a bun (in the form of croutons)! 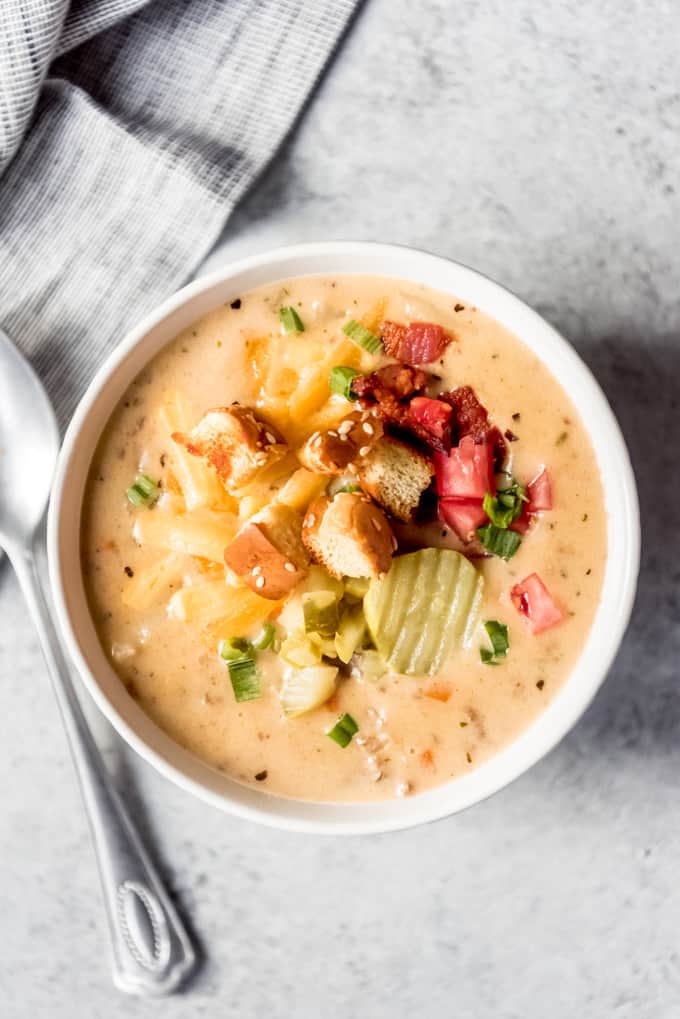 When the weather is chilly, nothing sounds better to me than a bowl of soup with a big slice of sweet cornbread! There is nothing like being inside a cozy house while it's cold outside and making a pot of soup for dinner. Zuppa Toscana and Broccoli Cheddar Soup are  always a hit at our house. So I knew they would love another favorite food twist in soup form: cheeseburger soup!

This cheeseburger soup is a savory, loaded creamy, cheesy soup that combines the flavors and ingredients normally found inside of a cheeseburger!

It's an easy and delicious soup to prepare, but my favorite part are all the garnishes on top. For anyone who picks their pickles off their cheeseburgers, I really recommend you give them a try in this soup! It really gives it that something extra that makes you think, "wow! this soup really DOES taste like a cheeseburger!" Even my pickle-hating kids and husband preferred this soup with the pickle garnish on top.

I prefer to use sharp cheddar cheese for this soup, although many other recipes call for Velveeta. I prefer the taste of cheddar and think the soup is plenty creamy as is, but you could do a combination of both, or use just Velveeta cheese if you prefer.

How to make cheeseburger soup 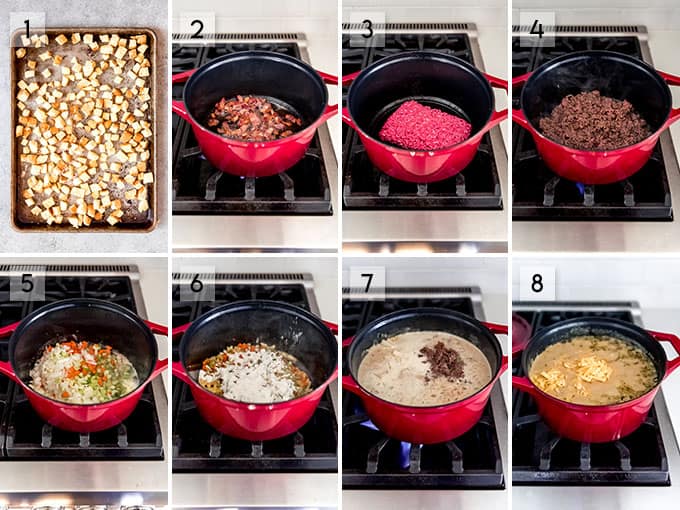 Can you freeze cheeseburger soup?

You can freeze this soup in a gallon-sized zipper topped bag, just make sure that you press the air out of it so that it takes up less space in the freezer. You may also wish to freeze it flat on a baking sheet and then turn it on its side for a more convenient storage solution.

Thaw the soup in the fridge overnight and reheat, or take it from the freezer and place it in a slow cooker on low all day for a low maintenance dinner. 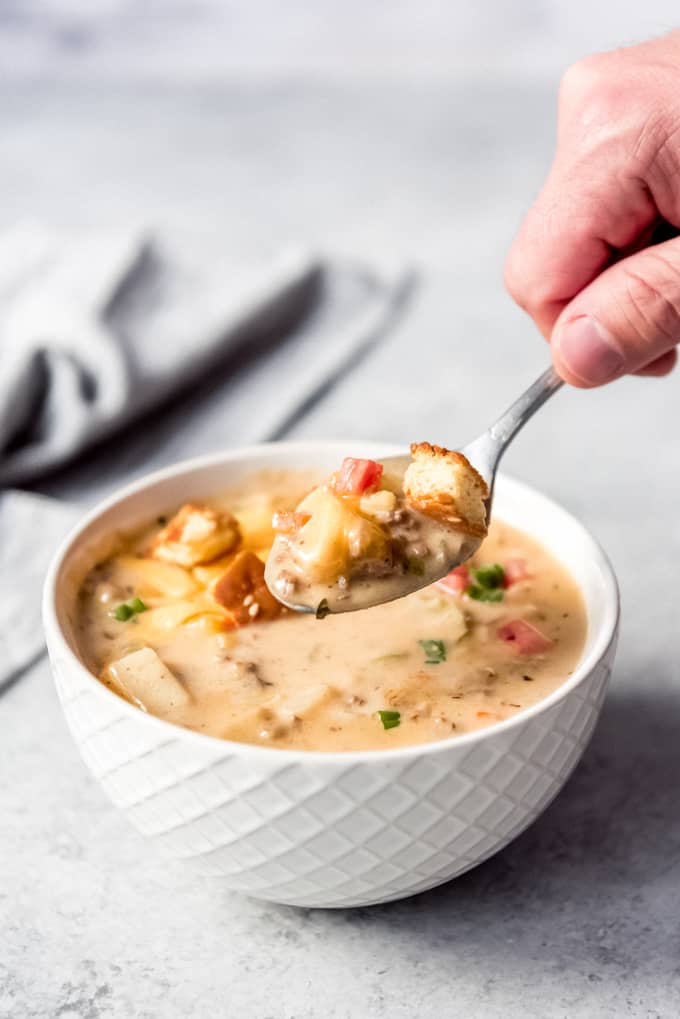 How to thicken cheeseburger soup?

I like to thicken this soup with a little flour that gets sprinkled over softened vegetables. Once you whisk in the broth and let everything simmer, you won't even notice the vegetables or flour in the soup, but they create an incredibly flavorful base. The potatoes also release starch while they cook, which contributes to the creamy, silky texture of the soup.

If you find that your soup isn’t as thick as you’d like, you can make a cornstarch slurry by combining equal parts cornstarch and water and add it to the soup while it’s simmering. Or if you prefer your soup on the thinner side, you can add in a little more broth or milk to thin it out.

But obviously I think it's just the right consistency as written, thickened with just the flour and starch released from the potatoes. 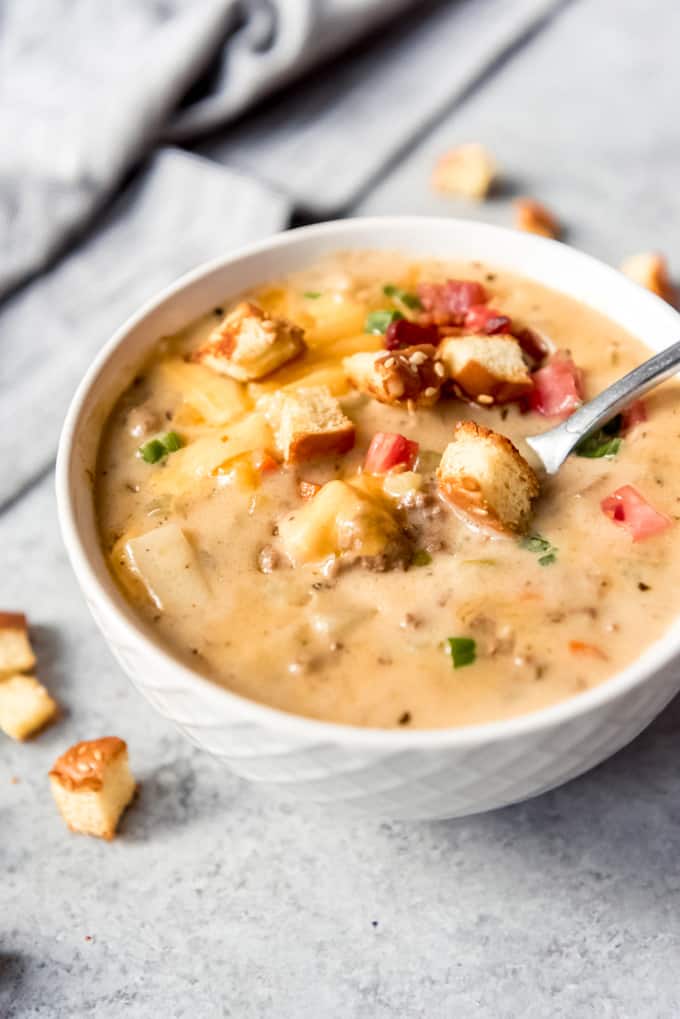 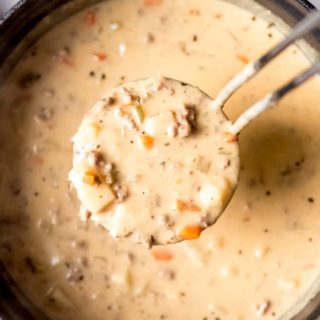 Adapted from Taste of Home.

Amy is a former lawyer, now stay at home mom, who is the creator of House of Nash Eats where she shares modern comfort cooking and family friendly recipes. She and her husband have two daughters and live in the California Bay Area. Amy enjoys hiking, travel, catching up on her favorite t.v. shows, and listening to audiobooks and podcasts.